Ecosign was responsible for designing a brand new site for the Whistler Olympic Nordic Centre including but not limited to parking and transportation, the cross-country competition trails and stadium, two ski jumps (90 and 120 K) and the biathlon pistes and stadium. The project was constructed in 2006 and 2007 at a cost of $115 million creating a legacy for Whistler’s Callaghan Valley. 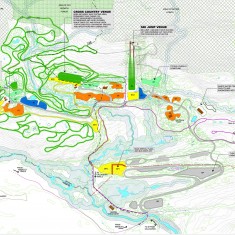